To loose something, get it back and consciously loose it again 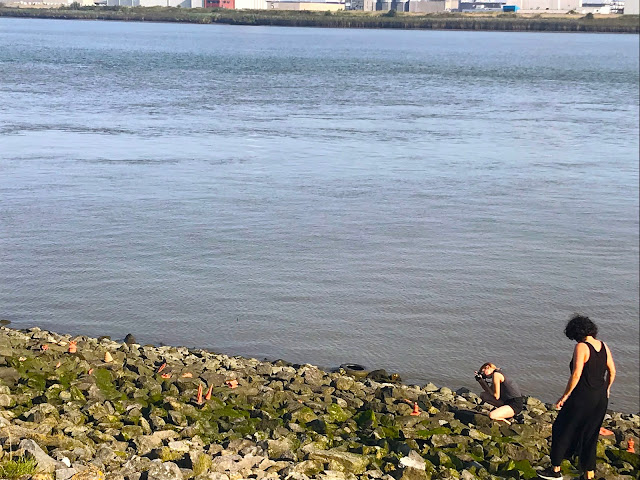 I wanted to loose something. I wanted to feel the loss, to understand. To grasp some sense, to recover it somehow and then loose it again.

I have spent two and a half months memorizing and making in clay, pre-Columbian objects purchased by the Paul and Dora Janssens collection, now on display in one of the most popular museums in Antwerp, the M.A.S. This is one of the pre-Columbian collections that the Colombian government has listed as having a large number of pieces of heritage value to the nation.
What I did during my time in Antwerp, was to go almost every day and memorize one, two or three objects per day, without using a camera, drawings or written notes. Then at studio of the residence I reproduced them from memory using local clays and unifying their scale. As I progressed in this memory practice, I realized that there were different ways of memorizing that worked more than others. For example, talking to myself out loud in the museum, describing the shapes of the objects in a rather playful way, comparing some figures with things that were familiar to me, worked very well. In this sense, the void that exists between their enclosed meaning and myself here and now, became more tolerable. I discovered I could memorize the most difficult objects such as the different Tunjos and Quimbayas warriors or the Malagana tongs. Then I had the impression that these new objects were more than just regular copies, as if they were being activated as I went on making them. Animals, humans, houses, where gaining a presence as they existed taking space in the studio.

Then, with a photographer specialized in ethnographic photography from the Tervuren Museum of Africa, we did 32 photos of the 32 objects. The gesture of photographing them pointed out their manufacture: the fact of sharing a scale and materials, made the photographed objects lose their aura of exoticism, Fantasy and remoteness. Because they were raw you can see the strokes of the fingers and the marks of the spatulas, reminding you of a presence, bringing them closer to us.

After somehow recovered, it was time to loose them again. My plan was to throw them to the Schelde river. I choose a place in the left river bank where you could see where the port of Antwerp. When I started to unpack the objects and put them on the rocks next to the water, suddenly the objects gained even more presence. Having freed them from the vitrines, the directed light and somehow the fact that they were no longer made of gold but earth, made us Ans, Charlotte and I understand something more about them that otherwise would not have been possible in the physical and discursive confinement they were in.